Deep in the Woods by Chris Marie Green 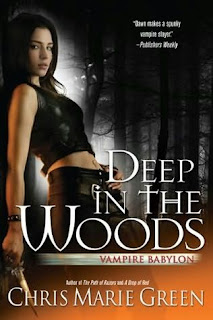 This is the 6th book in the Vampire Babylon series and possibly the last.
The storyline was wrapped up but the author left us with a little bit of an opening for more.  I hope there is more because I became quite attached to Dawn, Costin and even Jonah.
Jonah and Costin share a body and at first, Jonah was a bit of a psycho but by book 6, I sort of liked him and was rooting for him.
It's pretty cool to see the evolution of an author in a series of books.  Sometimes the evolution is for the better, like in Chris Marie Green's case or for the absolute worse, as in Laurell K. Hamilton's case. (Do NOT get me started about the unbelievable decline of the Anita Blake series!!)
In the Vampire Babylon books, we've had the opportunity to watch the characters grow and in turn we've watched the author grow, too.  Her writing has gotten better and better and her characters have developed real depth.
I won't give much of the book and storyline away but this whole series has used the usual sexy vampire schtick but with a very unique twist.  The first trilogy was based in Hollywood and used that vain industry as a front for the vampire underground.
The second trilogy took us to London and an all girls school.  One of my favorite things about it was that Green didn't rehash the same tired storyline over and over again.
I think I'd read this entire series again and that is saying a LOT!
Posted by DeAnna at 9:21 AM