Minute Maid Park, that is.

Yesterday the Astros played the Brewers after a 7 game losing streak.
I wasn't feeling very confident. In the last three years, I have yet to see a winning game in person.
It was like I was a jinx.
The day didn't start out very well. We rushed to the park to get there early enough to get a free Astros stadium blanket. They were only giving them out to he first 10,000 people. The game started at 6, the doors open at 4 so that meant getting there at 3 to get in line.
After parking illegally, praying the car wouldn't be towed during the game, I got in line underneath the blazing sun.
Thank goodness for my iPod. I listened to my Jim Rome podcasts and the time went by very quickly.
I was relieved to get out of the sun and grab my free stadium blanket AND a $5 Dr. Pepper.
As we trekked to our seats, we realized that we were positioned directly under the unforgiving sun. There was no shade to be found.
I was hot, crowded and sweating. I'm not a nice person when I'm sweating. I hate to sweat if sex isn't involved and in the crowd of 40,000+ people, sex definitely wasn't happening.
To make matters worse, Wilford Brimley's long lost extremely fat brother settled himself next to me.
He was decked out in a stained white t-shirt, dirty jeans and suspenders. Yes, I said suspenders.
He took up his chair and some of mine. To make matters worse, he got up a million times to get him and his equally large daughter food.
I swear to you that they must have spent at LEAST $100 on food. I saw a minimum of 6 empty $5 soda cups and I witnessed the devouring of 4 BBQ sausage dogs, nachos, popcorn and possibly a hamburger.
I was wedged in next to this man and everytime he sat down, he somehow grabbed the tail of my blouse and took it with him into his chair. I would have to grab my shirt and yank it back out of his seat.
I was pissed. It was so fucking hot, I was sweating and Wilford Brimley was sweating on me.
After about an inning of this, I spotted the margarita man. Ahh...alcohol.
I paid $11 for a 3 foot frozen margarita and everyone around me noticed a marked improvement in my mood as I sucked the remains of my drink from bottom of my 3 foot glass.
Suddenly, the world seemed like a better place. I was cooler because the sun was setting behind the park, the fat guy seemed to shrink a little and the Astros were playing amazingly well. Then in the 6th inning something amazing happened. Wilford and his daughter left. Now, I wasn't complaining, but these people spent enough money on food to feed the entire continent of Africa and they leave in the 6th inning? That was so weird to me. But whatever...I got to stretch out and I was suddenly even happier!

Before the game began, though, I got to watch batting practice and more importantly, I got to watch the bullpen warm up. This included my boy, Brad Lidge. I was so close! SO CLOSE.... 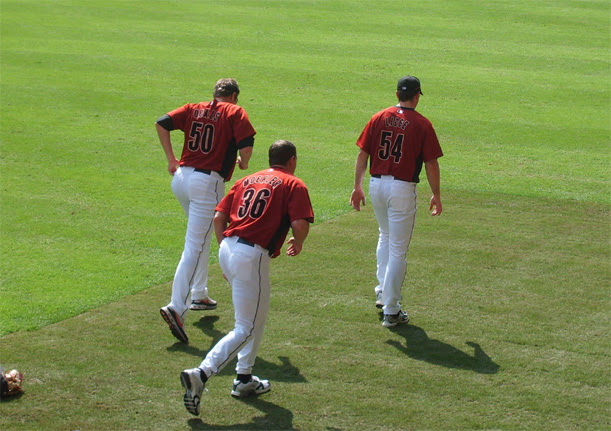 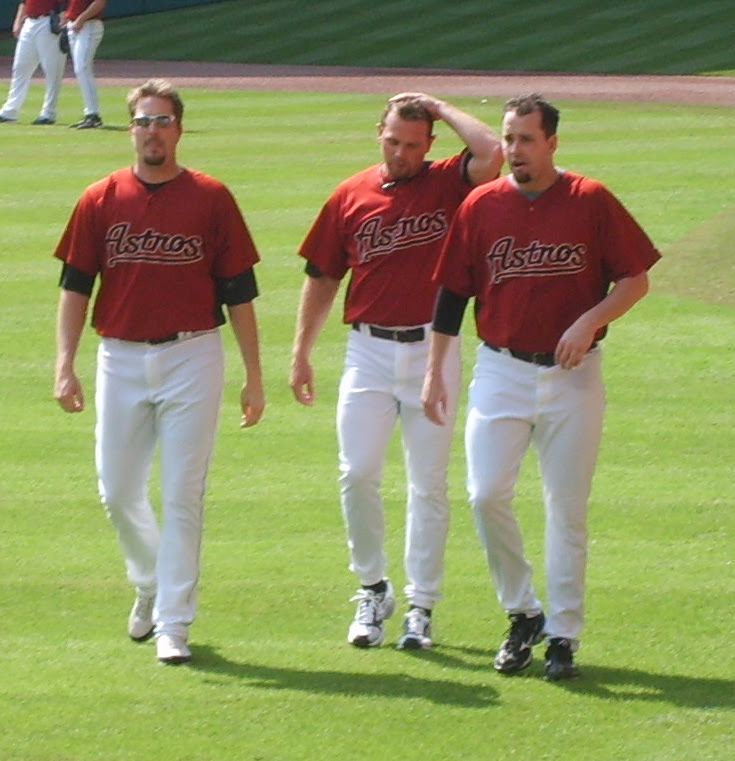 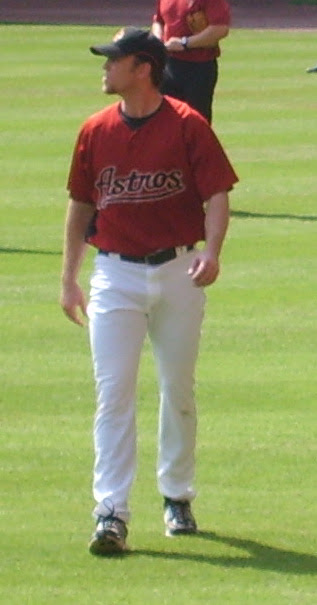 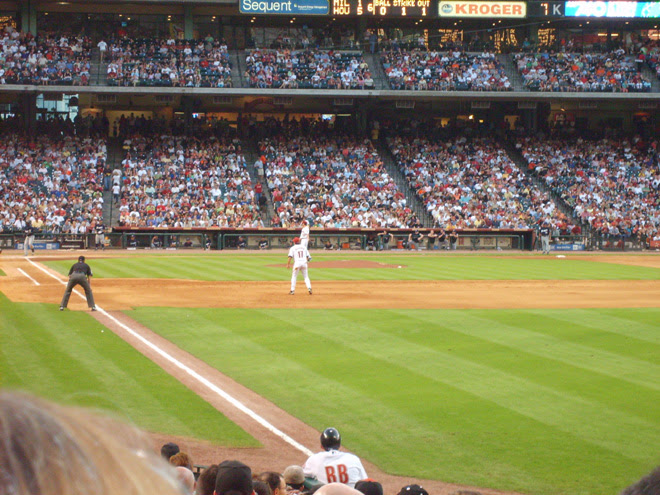 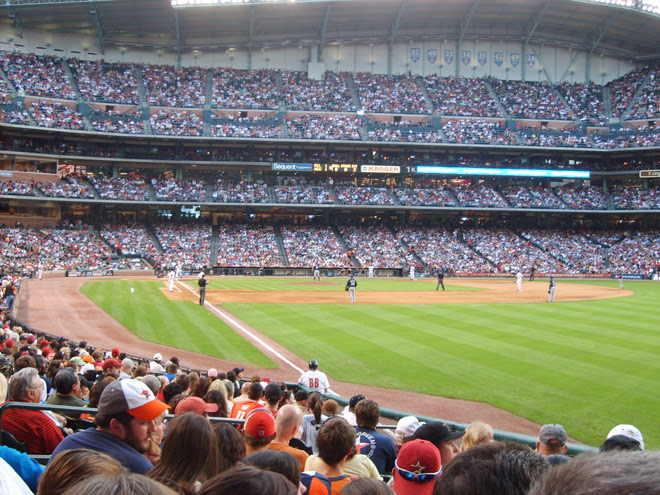 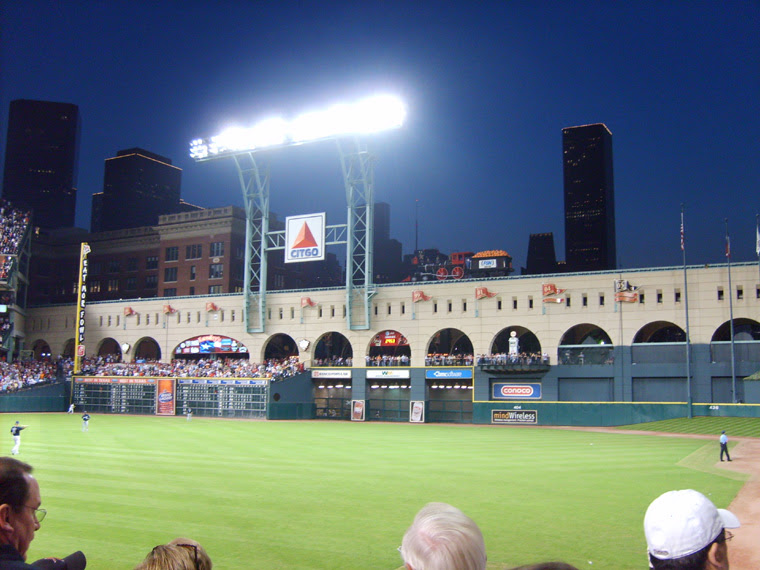 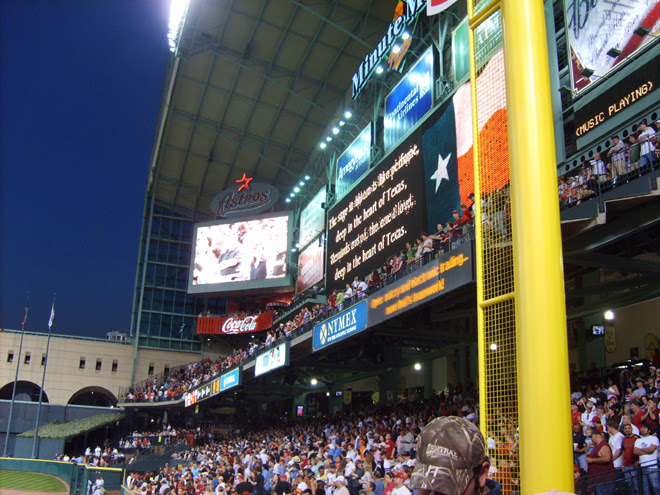 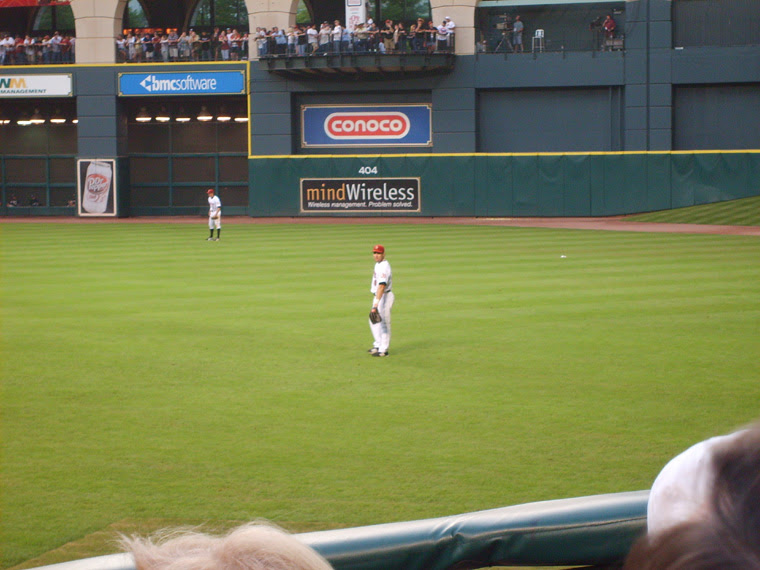 Posted by DeAnna at 1:09 PM No comments:

I taught a computer basics class today and I had a "student" who was about 105 yrs old, with short term memory loss.
Needless to say, I'm blogging drunk right now.

Before I saw the doctor that day, a medical student came in and introduced herself. She asked if I would allow her to ask me a few questions about my condition and I, being someone who wants to help people gain a higher education, allowed her to.
She saw that I was on a cruise earlier in the month so she started quizzing me about that. Did I eat anything in Mexico? Did I buy anything? Did I eat off of any strange pottery?
I answered "no" to all of her questions and even added that I was aware of the fact that the cruise ship is a floating petri dish and so I tried to be careful about germs..."I'm a bit of a germaphobe" I said, "I wash my hands a lot. So I was careful about not touching things like the stair rails and the bathroom handles because of all the people who had probably touched it before me."
She writes on her notepad, "Mmm hmm....So, let me ask you; have you ever been treated for your OCD?"

My outrage certainly caused her to start backtracking. "Uhh..err...umm...no, I mean there are so many different levels of OCD. Some people are ultra organized and that makes them successful..."

I just stared at her until she stopped stammering and shut up.

"I'm simply aware of the germs that are out there and I'm careful about how I expose myself to them. I'm not ready to be hospitalized, yet." I smiled blandly.

She moved on but I swear she mentioned compulsive behavior and OCD 3 times! I felt like saying, "Ok, bitch. I'm done with you. Where's the doctor?"

She also accused me of being a slut when she mentioned my pain could be caused by a STD and then she also insinuated that it could all be in my head.

Luckly, the doctor came in and debunked all the med student's theories.

It was scary how quickly I started doubting myself.
Maybe I really wasn't in pain. Maybe this was all in my head.

Maybe I am a crazy whore?
Posted by DeAnna at 1:09 PM No comments:

Everyone's talking about it so I don't feel the need to go on and on about the events of the last few days.
An unbelievably disturbed individual gunned down innocents receiving higher education.
We've been saturated with the details by the media. They live for this and we lap it up.

We keep hearing the same question over and over: Why didn't anyone stop him before he committed this act?
Let's get real here. This world is full of weird people. In my line of work, I see at least 20 nutjobs a week.
Any one of those nutjobs could come in here with a gun and kill us all.
How can you tell the difference between kooky and dangerous?
Yes, his stories were disturbing but I don't see anyone locking up Dean Koontz or Stephen King.
It's not always society's job to diagnose and fix broken people. Where were his parents?
I heard on some news show that his aunt said he's always been disturbed and his family worried about him. Did they worry enough to put him under a doctor's care? No. They sent him to college.

But the country is looking for someone to blame. Isn't that just like us?

Unfortunately, the gun laws might take the blame. Now the moonbats are talking about tighter gun control.
Please. Surely, anyone with a shred of sense knows that this killer was disturbed enough that if he couldn't walk into a store to buy a gun, he'd find another way to get one or find another way to kill people.
He was psychotic. He was out of his fucking mind and his goal in his life was to end the lives of others.
That's what's great about psychotics. They have follow-through. Me, I quit in the middle of everything (just look at this blog!). But a really good psychotic will do whatever it takes to achieve his goal.

The Virginia Tech killer would have done this no matter what.
The "why" of the situation might make us all feel a little better, but it doesn't always prevent the next one from happening.
Posted by DeAnna at 1:10 PM No comments:

I started to respond to Adam's comment in my own comments but it ended up so long-winded that I decided to turn it into another blog post.

Yeah, this isn't a popularity contest because if it were, I think Don Imus would have been off the air 30 yrs ago.
However, I think CBS's decision to fire him was bullshit.
If everyone is so offended by what he said, then let the market make that decision. Let his sponsors pull the plug. Let his listeners make that decision.
Imus didn't endanger anyone, he said something absolutely stupid and then apologized (ad nauseum) for it.

The thing that pisses me off the most is that it's fucking Al Sharpton leading the torch-bearing villagers.
Al Sharpton! I didn't hear a "My bad" from him when those Duke players were cleared of all charges, yet he was the one turning it into a race issue when they were originally charged.
Now, come to find out, the BLACK woman was the liar. Where's Sharpton now?
Oh right, he's vilifying Imus for a dumbass remark. As if Imus is some dangerous individual. I'm thinking Don Imus would snap in half if you sneezed on him. I don't think he's a threat to modern culture.

Laurence Simon made a good point in one of his posts about Al Sharpton and his glorious history.

You should go read it.
Posted by DeAnna at 1:11 PM No comments:

Are you freaking kidding me?

Don Imus was just fired from his radio show because he called a group of women a bunch of nappy-headed hos.
I'm not saying it's ok to call people names like that on the radio or any other media format but how can he be fired for it when I know for a fact he's said many ridiculous things like that and no one has batted an eye.
I'm not a fan of Don Imus whatsoever but it's absolutely ridiculous!

Somehow we have to find a balance between cultural tolerance and hyper-sensitivity and extreme political correctness.

It's still a free country (isn't it?) and we shouldn't have to walk on a thousand miles of eggshells.
Posted by DeAnna at 1:11 PM No comments:

Megadeth Has Your Eyes

I found this story highly amusing.

Metallica may be a cool name for a heavy metal band, but a Swedish couple is struggling to convince officials it is also suitable for a baby girl.

I don't know what the problem is. Metallica is a lovely name.
It's not the government's job to determine what's an ugly name and what isn't.

I'd rather be named Metallica than Hortense, Gertrude or Maude.
Posted by DeAnna at 1:12 PM No comments:

Today is the Houston Astros' Opening Day!
Baseball season has arrived and I'm a happy girl.

I don't have tickets for today because they were too difficult to get but I'm glad now because I am not sure I'd feel up to it.

I do have tickets for Friday and since it's Good Friday and I'm off, I can rest the whole day and reserve my energy. (No, we haven't discovered what is ailing me yet.)

I've been following The Crawfish Boxes during spring training and I feel good about the team we have this year.

It's no secret that I'm a huge Brad Lidge fan and his performance last year was a disappointment.
I have confidence that he can turn it around this season.

I think it's a HUGE mistake to keep Wanking Wandy Rodriguez in the starting pitcher's line up. Mark my words people, they are going to live to regret that stupid decision.

Anyway...it's baseball season all over the nation! Let us all rejoice!
Posted by DeAnna at 1:12 PM No comments: