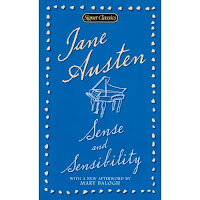 I'm not sure why I didn't read any Jane Austen in high school.  I thought it was mandatory but apparently not in Texas.
A few years ago, I endeavored to read Pride & Prejudice and really enjoyed it but I never moved on to any of her others.
A few months ago, a coworker and I were talking about this.  She had never read any Austen books either and we both felt like this is something we needed to do so the idea of a Jane Austen summer was born.
We told a few people about it and they got excited for it too.
So, we're a book club of sorts except we want food and booze at our meetings!
Anywho....
What can I say about this book that hasn't already been said?  It's really really good!  Is that original enough?
I just loved Elinor and all her properness (am I making up words here?) and then there is impulsive Marianne who really irritated me with her broken-hearted whining.  Oh get over it....there is surely another man out there, right?
But poor Elinor is stuck with this secret about Edward and Lucy all the while loving Edward herself.  It's heartbreaking angst at its finest!
My favorite characters were Mrs. Jennings and Mr. Palmer.  Seriously, those two cracked me up in totally different ways.
Mrs. Jennings is just this unrelenting busy body who gossips incessantly and jumps to one conclusion after another.  She is 100% fun.
Mr. Palmer's dry annoyance at his wife is hilarious.  He doesn't care what she thinks and pays very little attention to her.  But we find toward the end that Mr. Palmer has a true heart of gold...just very little patience for his own wife.


Some of our participants are having a tough time with the book.  Austen's writing style is not exactly Stephenie Myers but I keep telling them to persevere because it's SO worth it!

Persuasion is next!
Posted by DeAnna at 10:35 AM 3 comments:

Judging a Book By Its Cover... 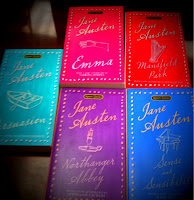 I did it, I admit!
I loved these paperback covers so much more than any others, I made sure to order them all.

Some friends and I are reading Jane Austen this summer.
I'm loving Sense & Sensibility and I'm almost done.
Next is Persuasion and other Austen lovers usually say it's their favorite.

Looking forward to it!


(I know Pride & Prejudice isn't pictured. It's on backorder.)
Posted by DeAnna at 10:07 AM No comments:

Ugh.  I hate it when people don't update their blog for a long time.  I just think it's rude and unforgivable.
So...anyway....

It's been a very stressful few weeks.  I got busy, a close friend got some devastating news, I have lots of projects coming up that are taking a lot of my time and I guess that's all the excuses I can come up with.
Because of all this mess, I haven't had much time to read.
I haven't finished Mary, Called Magdalene because I couldn't devote any time to it, but I snuck in the latest Stuart Woods book, Lucid Intervals because it's a super fast read.


This summer, some friends and I are endeavoring to read 6 Jane Austen books...our own little Jane Austen book club, I suppose!
We were to start Sense & Sensibility today but I cheated and started it Saturday.
So far, so good!
Posted by DeAnna at 11:19 AM 4 comments:

The Next Hemingway, I'm Sure.

I'm not sure why I still blog here. I don't think anyone's reading and who can blame them? I've been an absentee blogger and I deserve to lose custody of my readers.
I lost my blogging mojo a long time ago. I guess I realized I didn't have any strong opinions about anything anymore and who wants to read someone who rides the fence most of the time?
Years ago when I started this thing, I was opinionated and political but now I've lost faith in it all.
I think I sound depressed and shit, maybe I am. I certainly don't mean to sound negative because I'm not really a negative person; I tend to try to see the bright side of all situations but let me tell you something...that gets exhausting!
Sometimes, you'd like to just roll around in your misery for a while and that's ok, I think...just as long as you eventually stand up.

I've had good news lately. I connected with an author a few months back. She wrote a book about keeping a journal and she ended up sending me a review copy. It was great and I am going to be using it for my journaling classes this summer. When I told her what I've been doing for the past six years in teaching kids about keeping a journal, she was very excited and presented me with the opportunity to write my own book on journaling.
Yes, I could be a published author one day soon!

Before you know it, I will be a moody writer drunk on my own success.
Posted by DeAnna at 8:57 AM 5 comments: