I'm leaving on Thursday for a cruise. I'll hop aboard the Ecstasy and ride that big mamma jamma to Cozumel and back.

This will be my first cruise and I'm not sure what to expect. Everyone tells me it's mostly just eating and if that's true, then I'm good with that.

I'm not sure how I'll feel about being "trapped" on a ship for several days but if all else fails, I can plug in my iPod, grab a book and read under the Mexican stars.

Anyway, I'll be back (hopefully) next week. I'm hoping I won't become a story on Primetime or 20/20 after I fall overboard and the cruise line tries to cover it up. I might have to skip the binge drinking.
Posted by DeAnna at 1:16 PM No comments:

So, today, someone that works within the same infrastructure, asked me out.
I've known this guy ever since I started working here and have always thought the world of him.
When we were all evacuating for Hurricane Rita, he found out that I didn't have a place to evacuate to so he gave me his cell number. If I got stranded, he had clearance to come in and out of the cities in the county so he would come get me.
That was like a beacon in the dead of night at that time. We were all so worried about our homes, our lives, everything......any kindness seemed so genuine and rare.

Today, he came in and asked me out. My kneejerk reaction was to say I was dating someone.
As nice as this man is, he's just not my type.
But don't ask me what my type is because I couldn't tell you. I just know it's not him.

After he left, I had second thoughts. What's so wrong with this guy? He just couldn't be nicer. He's got a steady job and he's got grown/almost grown kids who are successful college students so he must have done something right with them.
Sure, physically, he isn't someone I could see myself dating but is it wrong of me to judge this book by his cover when I know his pages are pretty good?

And also, what happens if you tell someone you won't go out with them but then you change your mind? Do you run after him and say, "I was lying! I'm single. My first reaction was to reject you. My bad!"

If I run after him yelling "Mea Culpa! Mea Culpa!" and he doesn't run the other way, I just might go out with him. Well...not really.
Posted by DeAnna at 1:17 PM No comments:

So, I have to come clean about the guy I blogged about in the previous entry.

I have a problem, kids. Teeth are a deal-breaker. I've talked about this before.
If your grill is jacked, I can't date you. It's just that simple.

Oh, I can wax poetic about your sparkling personality or your quick wit but if your teeth point in 10 different directions or they're the color of a hazelnut latte, you can't get with this.

One day, when I'm 80 yrs old and surrounded by cats and their droppings, I might wish I'd settled for Ol' Snaggletooth because by then, neither of us will have any teeth but I'm still young enough to wish for a nice set up choppers.

You know what I hate about this "holiday"?
I hate how it singles out the single person.
It's like a huge neon sign pointing to you that says "Unloved Person Here" with a huge arrow.
Everyone around you is smelling the blossoms of the flowers that were delivered, eating the chocolates, waving around the diamonds....then there is you; the single person: flowerless, sans chocolate and diamonds. You're an unlovable loser and now the entire world knows it. 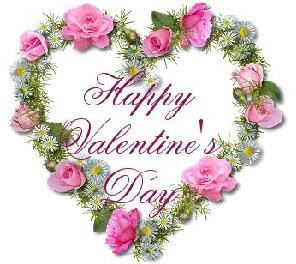 Posted by DeAnna at 1:18 PM No comments:

CNN reports that Anna Nicole Smith has died after she was found unconscious in her hotel room.

One tragedy after another.
I figured it would end like this...just not this soon.

That poor baby. I hope someone with one shred of sense and decency is charged with raising her now.
Posted by DeAnna at 1:18 PM No comments:

This is a made for TV movie just waiting to happen.

A NASA astronaut accused of trying to kidnap a romantic rival for a space shuttle pilot's affections was charged with attempted first-degree murder Tuesday and will remain jailed.

Nowak raced from Houston to Orlando wearing diapers in the car so she wouldn't have to stop to go to the bathroom, authorities said.

The fact that she was ok with pissing herself for 900 miles, leads me to believe that this is one crazy bitch.
Posted by DeAnna at 1:19 PM No comments:

On this very day, two years ago, my nephew was living his last day on Earth.
The next day, he went into the water and never returned.
His body was found the next day.

I sometimes have these wild daydreams about being allowed to go back in time to this day, two years before, and stopping him from going out in that boat.
Then, today, we would all be different people. I know we've all changed significantly. Maybe on the outside some of us seem the same but inside....inside our souls have been altered.

I guess our brain tries very hard to protect us from the unpleasantness of life. If my brain allowed me to experience the true horror of that day, two years ago, I might go absolutely insane.

It's been two years and I can still remember every moment of that day vividly. I still have moments where words or phrases from that day run like an audio loop through my head.
It's amazing to me that we still go on. I fully expected the world to end. How do we keep going after such a horrific loss?

A beautiful 23 yr old man died on February 3, 2005. He was gorgeous, he was genuine and he was so full of hope and promise. But now he's gone.

My sister lost her child. The child she gave birth to and lived her life for.
The rest of us lost an extremely important member of our family.

Rick was born in April. I was 8, about to turn 9 in exactly two months.
I was in the 3rd grade and I felt like the most special little girl in the world because I was an aunt.
I didn't know anyone my age who was an aunt.
I can remember when my sister let me touch her belly and I felt him kick. That was amazing but I also remember when she let me hold that tiny baby.
I had to sit down and then they lowered him into my arms. They were so protective, so sure that I'd drop him on his head or squeeze him too tight.
I held out my arms like I had seen other people do on TV. He was wrapped in what seemed like a million blankets with only his tiny face peeking out and I stared down at him, not know what the heck to do or to think.
I was amazed by him.

For the next 23 years, I continued to be amazed by him. He turned out to be so GOOD. So thoughtful, so caring...he actually cared about other people and always found something nice to say about everyone even about the most rotten ones.
I sometimes wonder if he were just too good for this earth.
At some point, in order to survive, we have to become hardened. We have to close our eyes to some things and we have to harden our hearts to others.
Maybe that would have been too much for Rick. His heart was so good.

I still miss him.
Posted by DeAnna at 1:19 PM No comments: