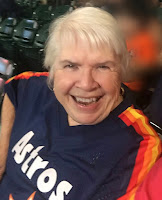 This is lovely. I'm glad I had the opportunity to get to know your Mom even though it was only a little bit. I sure can see a lot of you in your description of her.That's a very good thing. Love you sweetie. Happy Holidays and reach out if you need anything. I'll be in town for a while.

This is the greatest compliment ever, Jayne! Thank you! Love you!

Thank you for sharing this, I can imagine how difficult it was, but I'm glad you did and it is such a beautifully written eulogy.
My mum passed away on Weds, aged 89. The hole it has left is incalculable. I hope I can find the courage and the inspiration to craft as beautiful a eulogy as this. Thank you. And wishing you a renew-ing 2020.

What beautiful words! Wishing you fabulous days ahead in 2020!

What a beautiful eulogy, and I feel this to my core. My dad passed away 2 days before his birthday and 2 weeks before mine, and since then it's been one holiday after another in which missing him is the new normal. However, I have little ones who need me so the show must go one. Blessings to you and your family this holiday season.

Thanks for sharing this beautiful tribute. I think you are very much your mothers daughter since it seems you inherited many of her greatest characteristics! May your heart continue to be filled with wonderful memories of times shared! May hugs, Nance