Confessions of a Jane Austen Addict by Laurie Viera Rigler 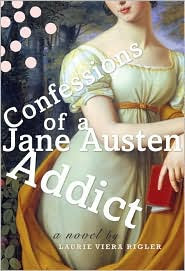 So, sometimes books are like junk food.  It's not nutritious but you love it anyway and in a lot of cases you eat the entire bag, box, bowl of whatever in one sitting.
From Barnes and Noble:

In this Jane Austen–inspired comedy, love story, and exploration of identity and destiny, a modern LA girl wakes up as an Englishwoman in Austen’s time.

Confessions of a Jane Austen Addict was like that for me.  Ok, it took two sittings but I devoured the whole thing.  It was fun and snarky and I am not afraid to admit I liked it.
I was disappointed in the end because I couldn't understand WHY a modern, 21st century woman ended up in the body of an early 19th century woman but when I was searching for the picture to add to this post, I found that there is a sequel.  This one is from the point of view of the woman who went from the 19th century to the 21st and that may be more fun and maybe I'll understand the point of the body switching.
But maybe like junk food, there is no point...it's just good.
Posted by DeAnna at 9:55 AM