All Dogs Go To Heaven 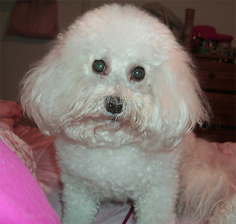 Yesterday, I had to make a horrible decision. I had to say goodbye to
my doggy soul mate, Crash.
He had been sick for a very long time.
Last year, he was diagnosed with Cushing's Disease and he would have good days and bad. Mostly good, I hope.
Friday, I noticed that he wouldn't eat and I didn't see him drink at all. Saturday morning, I was able to tempt him with a little sausage but he still wouldn't drink. Saturday night, he wouldn't eat at all and I could tell he was very uncomfortable.

I stayed up with him that night. I didn't sleep a wink. He seemed to feel better when I was holding him so I sat up in bed and held him all night long. I fully expected him to die in my arms that night. By 6 am, I had made the decision to take him to the only clinic I knew that would be open on a Sunday. I called when they opened and although I had never been there before, they agreed to see me.
I took Crash in and the doctor never mentioned euthanasia. He said we would try some medications and subcutaneous fluids and see if that would perk him up a little. I took him home but he got progressively worse. He started throwing up his medication and even though I forced water and food down his throat, nothing I could do would make him feel better.
We went back to the vet's office Monday morning and they did a CBC (complete
blood count) and the results were not good. Crash was in kidney failure and severely anemic.

The doctor sat with me and discussed our options. We could try forcing fluids through his kidneys for 72 hrs, do another CBC and see if his levels were
better. If they were, it would mean that he would be better for a while but they would gradually creep back up into the danger zone again. If they didn't get better, well...we'd be back to square one.
Crash had been through so much already, I couldn't imagine leaving him for 3
days in a vet's office to be prodded and poked when he was already feeling so
bad. Crash was only happy when he was with me. How could I do that to him when I knew in my heart these would be his last days?
The other option was to have him put down. I knew that was what I needed to do. I knew he was miserable and I knew it would only get worse.
I asked the doctor how euthanasia worked and he described everything to me in
detail and we even spoke of his remains. I was given lots of options and I
chose to have him cremated and to keep his ashes.
This vet's office is located in an historic home in Galveston. I was put in a beautiful room that was probably once someone's living room or parlor.
They brought Crash to me and we sat in a rocking chair and I held him for
several minutes, telling him how much I love him, what a good dog he has been
over and over again.

When it was time, I was led to an exam room where the doctor gave Crash an
injection while I held him. He simply drifted off in my arms and I held
him until his heart stopped beating.
I truly feel that I did the right thing for Crash. He's no longer in pain and I believe that he can see again. I even prayed that it was my dad that came for him.

Some may think all this pain and heartbreak over a dog is silly but Crash was
literally and figuratively by my side for 10 yrs. No one, human or dog,
has ever loved me as much as Crash did. Zoe and Piper love me but not with
the total abandon and obsession that Crash did.
I'm truly devastated and miss him so much but if the movies don't lie, then
all dogs do, indeed, go to heaven.