There are so many (SO MANY) people who lost everything and many more lost their lives (although officials are keeping the true death toll a secret).
My family are truly the lucky ones and somehow this terrible storm brought us closer together.
Sister #1 and #3 weren't speaking before this happened. The night of the storm #1 called #3 and told her that if she died tonight, she didn't want to die knowing #3 hated her so she apologized. #3 said she could NEVER hate her and things were going to be ok.
My niece and I weren't speaking either (same reason my sisters weren't speaking) but this situation totally erased all of that.
Suddenly, we all needed each other and we all came together.

I was the first person with power so I opened my tiny apartment to everyone. They came to soak up the air conditioning and watch the horrible pictures on the news. In the mornings, I made coffee and breakfast for everyone.
When the first donut shop opened on Monday, we bought 2 dozen donuts and fed everyone.

I shoved as much food from everyone as I could in my small refrigerator and freezer and what didn't fit, I took to Sister #2's house (she had power). She had evacuated and hadn't come back yet, but luckily I had a key.

Those are the stories that we're getting out of this hurricane business. Families and neighbors coming together and helping one another. When you have no power, damaged property and an uncertain future, that's pretty much all you have: one another.

To me, it seemed FEMA and the Salvation Army were here almost immediately. The media, though, started hammering away at Chertoff and other officials, asking why it took 24 hours to get from Austin to Houston. It's a good question but I have a question for those who didn't evacuate and didn't lose their homes.
Why didn't you have bottled water and supplies?
We never had to stand in line for anything because we were prepared. We all had full tanks and several days worth of water and food.
I can understand if your home was wiped away but there were miles and miles of cars in line for free food, ice and water.

I can't stop thinking about the cities of Galveston, Crystal Beach and Bolivar. These are places that have always been near and dear to my heart. I learned to drive on Galveston Island in a green Camaro. I took countless rides on the ferry from the Island to Bolivar. Years ago, my friends Julie, Jeff, Brad and I got a wild hair and drove through Bolivar one night looking for something we weren't sure existed. For some reason we kept driving and ended up in Winnie at 4 am.
We had no plan and nowhere we had to be; we just drove down the coast, never once imagining that one day it would all be gone.
I'm sure that's how the people who lived on Bolivar felt. Sure, it's a possibility when you live in the Gulf Coast but who really imagines it?

I wish I could say I was done with the Texas Gulf but this is where my family lives. It might take more than big bad Ike to run me off.

There used to be buildings and structures that lined the Texas City Dike. Now there is nothing 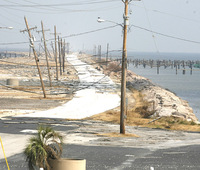 This amazed me....all the boats that washed up on the causeway to Galveston Island.