For Love of the Game

This is why I love baseball.
Last night, a great player reached an amazing milestone. Craig Biggio got his 3000th hit...and also his 3001st and 3002nd. 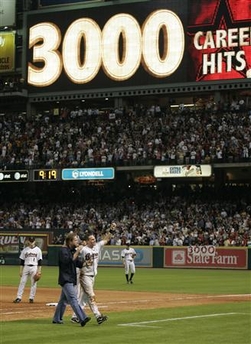 The excitement started building just 10 hits away. Then came the controversy when he was just a few hits away and they were going on the road. He had to hit 3000 at home. He just had to! But the cynics were whining, "He should just play because his team needs him, not sit out to reach 3000 at home."
He even said if he's needed, he'll play on the road.
He got a couple of hits on the road but luckily by the time they got home, he only needed three.
Last night, he not only got three...he got five hits!
When he hit #3000 and we knew it was going to be a base hit, the crowd went wild...I went wild!
It was something to remember.
But it didn't stop there. After the tearful embraces from his teammates and his wife and children, he grabbed Jeff Bagwell from the dugout and dragged him out to first base and the crowd went wild again.
The two poster boys for the Astros for 15 years stood out there, together again.
Dry eyes were impossible.

But wait! It doesn't end there!
This game is why we watch baseball. There was this history-making moment that will live on forever but then there was a tied game. Then the Rockies went ahead. Then we tied them again. Then in extra innings, with the bases loaded, Carlos Lee hit a walk-off grand slam that won the game. It was magic!

I get chills just thinking about it.
Sure, it sounds cheesy but it's baseball, baby! It's America!