Part Deux of this week's Idol aired last night and I was perched comfortably in my chair for the full two hours.
It was during those two hours that I came to the realization that I need a fucking life.
Seriously, I spent two hours of my life watching retards pretend to sing.
I could have been studying quantam physics or volunteering in a soup kitchen or something like that.
Instead, I was witness to the exploitation of mentally challenged people with their sans-a-belt slacks pulled up to their armpits or their eyes bugged out of their head in abject terror.

I'm actually thinking the Special Olympic bus made a wrong turn and ended up in the American Idol tryouts.
I was beginning to think there was something in the water in Washington State but then there were gasps of surprise and cries of shame in our home when this chick admitted she was from Houston, Texas: 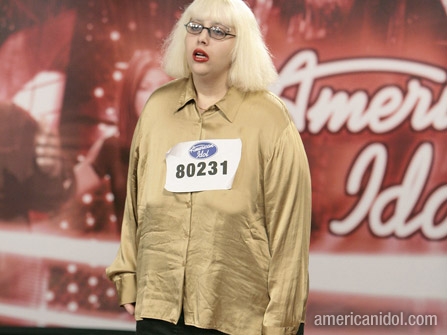 I wish I could find a pic of her mother but I'm too lazy so just imagine a long black wig on this one and you have the mother.
Why, for the love of MUD, did she not wear a bra? I kept asking myself that question the whole time her business swung to and fro during her performance of "Dontcha wish your girlfriend was HOT like me?"

On behalf of Texas, I'd like to apologize to Seattle.
Somehow, I feel responsible.
Posted by DeAnna at 1:26 PM